Early Childhood Analytics is beginning a series of state snap shots on Head Start demographics and capacity for services using data from the American Community Survey (ACS), Head Start Program Information Reports (PIR) and the National Institute of Early Education Research Year Book (NIEER). These snap shots will show a very basic overview of how publicly available demographic data from various sources can be used to analyze Head Start enrollment and demand for services at the regional, state and service area levels.

Data from the NIEER Year Book shows that the Alabama Pre-Kindergarten program, a state funded preschool program, served 3,897 4 year old children in the 2012-2013 school year. This pre-kindergarten program has no income eligiblity requirements and is free. Prelimary estimates put the number of 4 year olds served in the 2013-2014 school year at about 6% of all age eligible children in the state, or roughly 3,480. In 2014 Alabama expanded it’s Pre-K program to double it’s capacity and cited about 7,370 children enrolled as of December of 2014 for the 2014-2015 school year. With continued funding Alabama expects to nearly double it’s enrollment again by adding 400 classrooms serving 7,200 additional students in 2015. 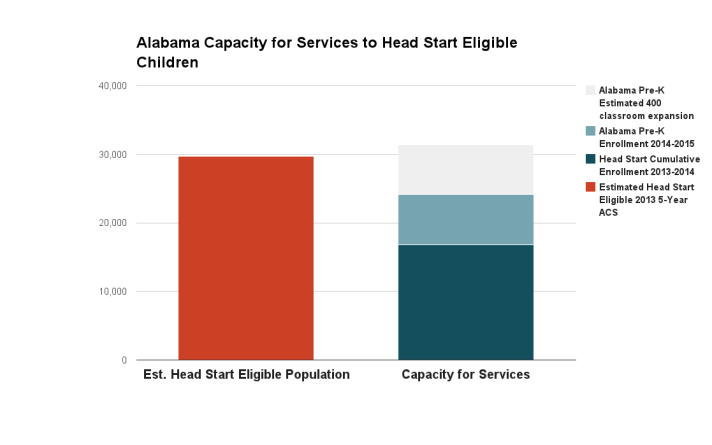 About 20,000 of the estimated 30,000 Head Start eligible children in Alabama live in one of the 11 biggest metropolitan areas in the state. This could explain the historic gap between the number of children served by Head Start programs (16,777 in the 2013-2014 school year) and the number of estimated Head Start eligible children in the state (29,698 in 2013.) Children and families in rural areas tend to be harder to reach, and the communities that serve them may have less access to qualified staff and infrastructure.

According to the NIEER 2013 Yearbook, Alabama’s Pre-Kindergarten program has services in 97 percent of the state’s counties with a goal of providing services in every county. This has the potential to reach even more rural areas of the state.

Further analysis can and should be done to ensure that the number of funded Head Start slots per metropolitan area match up with the estimated number of Head Start eligible children. As an example, below is an image and link to the Jacksonville, AL metropolitan area broken down by Zip Code with 2010-2012 data. Early Childhood Analytics produces these maps and service area overviews for Head Start Programs along with expanded analysis. Contact us for your program’s free 2012 sample report.

The American Community Survey produces economic data on age and ratio to poverty entitled “AGE BY RATIO OF INCOME TO POVERTY LEVEL IN THE PAST 12 MONTHS”. This report has a category for children under the age of 6 and groups these children by their family income as a ratio to federal poverty guidelines. It’s easiest to think of these as income categories that are similar to Head Start income categories such as “Income Eligible,” “100-130% of Poverty Guidelines,” and “Over Income.” The categories provided by the ACS do not match up perfectly, and the data is for all children under the age of 6 as opposed to 3 & 4 year olds. Still, it is a useful data set for identifying how many children are income eligible for Head Start and how many may fall in the category of 100-130% of poverty guidelines. This same data set exists for county, city and Zip Code level geographies and can be included in a report for your program’s service area. Contact us for more information.

For comparison purposes, here are the enrollment totals for eligiblity categories for all Alabama Head Start programs in the 2013-2014 from state wad PIRs.

Include a description of your program’s service area or your grant number and Early Childhood Analytics will send you a free report for your service area with 2010-2012 ACS data. An example of such a report for the Jacksonville, AL Metropolitan Area.

I am a Tlingit, born and raised in Tlingit Country, and a proud member of the Tlingit Nation. View all posts by Vince

Early Childhood Analytics is a consulting company that specializes in demographic reports and analysis for Head Start programs. I believe that data should be accessible to Head Start programs. My mission is to compile and deliver customized reports and Community Assessments so that your program can focus on planning and services to families and children. I provide fully interactive demographic reports for Head Start service areas using the most current American Community Survey data from the US Census Bureau and the Head Start Enterprise System, as well as full Community Assessments.